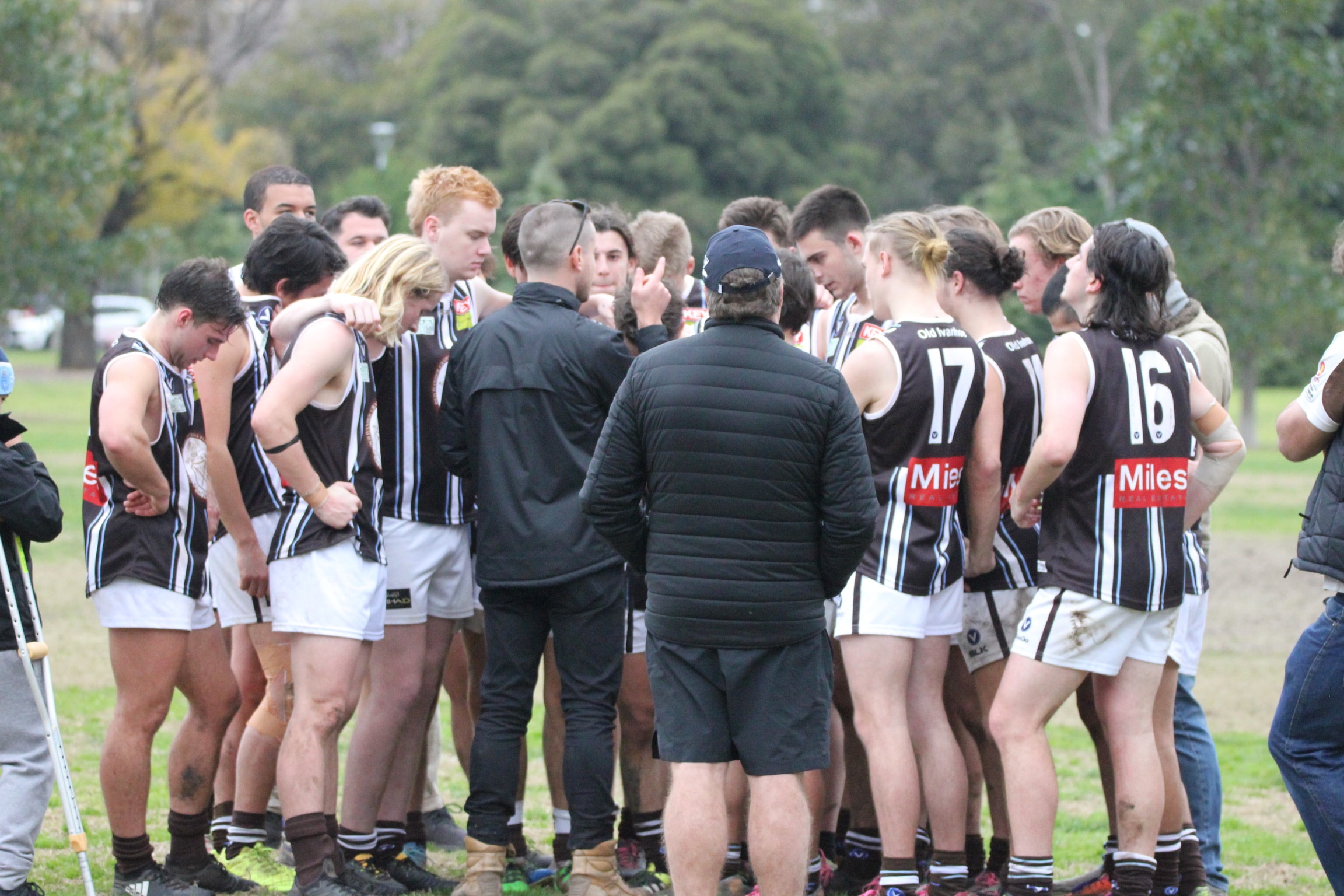 2018 was a hugely rewarding year for the coaches, players and supporters of the U19 team. Following the Section 3 Premiership in 2017, in 2018 we took on Section 2 in what was a tight contest week in, week out. As coach it captivated me, and collectively we went on a journey that ALMOST saw us in finals, and anything could have happened from there… After a sluggish start, we finished with a streak of 8 games without loss. Our season a tale of two halves.

Early engagement was good from a core group of around a dozen U19 players during pre-christmas training, taking part in the combined Senior/Reserve/U19 training block. Initially, a little unsure of myself at the helm, Antony Willison stuck up his hand for a leadership role immediately by coming up to me on day one, ensuring I had a grasp on the names of all the U19 players present, not actively seeking the role, behaviours like this quickly positioned him as the natural captain for the group.

Once into the new year, we hovered at around the 15-18 player attendance level for the majority of weeks leading into round 1. Numbers at training are everything in an age group that is easily distracted, without the critical mass of around 20 players in drills and running, the group can relax. Observing moments of sharp training, mixed in with lapses in focus, Assistant Coaches Josh Spoor, Joel Keane and I spoke on an uncertainty of what this group was capable of come season 2018 in the elevated division. This uncertainty was quickly dispelled once we consistently reached 18+ players at training – we realised the amazing natural footballing talent within the group – a talented group whose confidence fed off one another.

Round 1 to the first Bye

A talented group whose confidence fed off one another…

A strength when up and scoring, but what quickly presented as a weakness when challenged by good opposition. Round 2, OIGFC 9.15 to 11.8 Loss to Parkdale, Round 6, OIGFC 6.12 to 9.10 Loss to Williamstown – two games vs sides that were set to be finals teams that highlighted for us, an inability to whether periods of opposition momentum, stem their forward movement & scoring, and damage them once we gain back possession. The group would go quiet, become lose on direct opponent, and pray for the next interval siren to halt opposition momentum.

This two-speed football came to a fork in the road post our match vs Collegians Round 7, where we were clearly the better side, naturally coming to a 4 goal advantage early in the second quarter. Come the second half, our collective resolve was challenged by a hungry Collegians, who came home strong in their second half to win by 2 goals. That loss stung and we all knew we were loosing grip on our season ambitions.

The fork in the road…

Training the Tuesday following the Round 7 Collegians loss was a training performed without footballs, under pouring rain, with full attendance from the U19 Squad who knew it was time to speak with their actions… While the Senior group took the opportunity to spare the group from a shocking night of weather with gym work, the U19 squad submitted themselves with complete buy-in to a night of physical training that would test their collective resolve and support for one another. They stood up to the test, supporting each other, individually pushing themselves, generating laughs in moments of rest, and pushing through in Running, Boxing, Wrestling, & Circuit Work. A sodden group met in the Pine Lodge afterwards to come up with the following;

After 7 rounds of footy 3 wins 4 losses, where plenty of questions were asked of the U19 playing group’s on-field and off-field behaviours. Tuesday night’s attendance (22 May), participation, and dedication have made a strong start to the following goals and behaviours.

Following a training session without footballs, highlighting that 90% of performance results from the behaviours we employ without the ball in hand, the playing group have met on what they want to do with the 2018 season – putting forward the following these Goals as their destination, and these Behaviours, that will be the path to achieving their goals.

1 – Being known to have a Strong Team Culture/Environment

– Support (for one another)

– Comradery (Staying side by side through thick and thin)

The playing group have said they will carry out the onfield and off-field behvaiours with a positive attitude, always having a constructive and supportive voice.

Players and Parents… Our run home, and upward trend in performance I put down to players and parents/support team. The commitment of the playing group beyond rnd 10 was stark compared with early in the season. Call it “buy in”, “engagement”, “commitment”, “resolve” each game, more and more of the fundamentals were being met. Arrival on time training and matchday, contributing to the group with voice and actively supporting each other, professional pre-game and in-match behaviours, reading the pace of a game (when to attack/ when to defend), being organized in their role early on field (fwds/backs/mids), and collectively applying pressure and hunting the football – it was a sum of many parts that started to result in more comprehensive game performances. These parts saw us maintain possession and strangle opposition momentum from rounds 11 to 18, defeating all teams that were to make finals.

Finishing out of the top 4 by half a game – a cold dose of reality that early commitment will deliver opportunity. I’m writing this review the week of the grand final where Williamstown play Old Carey at Box Hill Oval. I would have loved our boys to have that opportunity. Despite not playing finals, we still achieved a lot as a team and as individual players. I know that all involved will look back fondly on the 2018 season, and into the future hopefully it represents a strong year of personal development for the players, carrying them onto future successes on and off the field. The season isn’t all about football, and it’s a great endorsement of the year that I’ve had a number of players seek me to be a reference on their CV for work applications etc, there has been some great development of young men over the year.

Our goal of a Section 2 flag now pushes to next year for a slightly different group to push themselves to success.  Those players of the 2018 U19 season whose age takes them to Senior and Reserve football next year, I know they’ll each be hungrier, more driven footballers as a result of the 2018 season, and should endeavor to stick together as success will come their way, if they maintain what they built in our season.

Thank you to the parents and supporters of the U19 team. Heading in as Coach I wondered if I’d have parents weighing in with opinions, distractions etc, but I was absolutely amazed at the unbiased support for the team they all gave. Special mentions to Jo Utting for capturing photos week in week out that assisted me with the coach’s messages, and Matt Hogg taking on an assistant coaching/running role for sheer love of the team and driving them to push themselves. I cannot neglect to mention the year 12s who played a massive role in our run home also, each have a massive part to play in next season and really excites me to go again. Others among the parents and supporters deserve a mention, but they know who they are! The only other person I’ll single out is Cathi Taylor for her tireless support of the boys – she would literally do anything to help the team, so selfless.

The 2018 U19 season has really taught me about the mantra of “you get out what you put in”. I now know why the likes of Cathi, Brett, Hoggy, Al Redman, Tarz, Oatsey x 3 (Junior, Senior and Mary), Vopp, Chalky, Kev, Don Dowell, Smooth Weddle, Nicky, Kingy, SHAKS, Boof and Diana, Pres Haros, trainers, coaches, committee members and the old boys who support the club at every match all pour their time and energy into the club. It’s a great and positive place that give you back as much as you invest in it. Onto next year.